Take some time to read through this important health gist… Guys too are not left out, at least you can educate your girlfriends and siblings

Dr Thomas Gent of the Association of Gynecologists once urged our females to wear bigger pants to avoid complications of health issues. Yet there is extreme negligence on these facts. Sometimes, girls complain about certain reactions around their private parts, they don’t remember these warnings. G-string pants have led to a big rise in the number of patients seen reporting genital inflammation. This happens when the g-string’s rope sbunkes and injures the sensitive skin around the genital area – it often occurs especially if they are too tight or made with badly stitched material.

It’s been reported collectively and categorically quoting some gynecologists, that thongs can cause health problems in those that wear it regularly. The health issues start from urinary tract and honeypotl infections. Thongs irritate and inflame the area around the Bartholdi’s glands, which produce lubricant during intercourse. They asserted that if the ducts that lead to the glands get hemmed, one could also develop a cyst next to one’s honeypot. Simply put, thongs irritate the honeypot and not allowing it enough air space which obviously reveals the harmful nature of the string.Thongs can also cause small tearing or deep cuts which can invite certain unknown infections. Worse, the small string on a thong allows the anus and honeypot to be connected with each other. The thongs as a link will carry bacteria from the rectum straight to the honeypot. Bacteria such as group B streptococcal disease and Escherichia Coli (intestinal infections usually found in humans or animals) can be passed into both the anus and honeypot.

According to research thongs have the capacity of increasing the chances of getting a yeast infection because of extra moisture built up from the tight fit. A manufacturer of a medication used for the treatment of yeast infections, Vagisil, affirmed that thong ought to be avoided because it causes yeast infections.

Reactions of the Skin

These are some of the results gotten from wearing g-string: chafed skin, irritation and infection. Chafed skin results when the thong rubs the sensitive of the skin. This can get infected and become very painful if not quickly noticed. The femalecore can also become irritated from the friction of the thong; these reports are according to research. 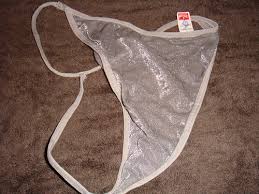 A side effect from wearing a thong is thrush and cystitis, according to Lifescript. These are not as common as chafing. Thrush is a fungus infection usually found in the mouth or honeypot. The skin gets red and swollen and white patches appear. Cystitis is a form of inflammation of the bladder. Both conditions have occurred among thong wearers.

Wearing a thong in cold weather can cause your buttocks to become extremely cold. Splitting your pants is an embarrassing moment that can be made worse if you are wearing a thong. This might be something to consider if you are going out in a tight-fitting pair of pants. It is an indisputable fact that, the palm wine tappers back then used to wear around their waists something that would just cover the front and leaving the buttocks opened for flies to perch. Such is the case of g-strings today. In those days whenever anyone puts on underwear, it usually covers the buttocks, as it is, it is quite glaring that the buttocks now cover the underwear instead of the other way round. While some say they wear it because they do not want onlookers to discover the trace of pants, others say that they need fresh air and all what not. 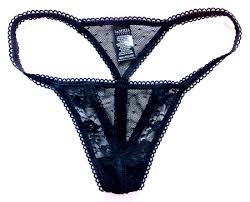 They work wonders for panty lines, but sometimes we get the feeling that our thongs are bad for us. Sometimes they’re too tight, sometimes they rub the wrong way and sometimes they just don’t feel all that clean.

But is the skimpy underwear really bad for our health? We called up Dr. Jill M. Rabin, an Associate Professor of Clinical Obstetrics & Gynecology and Women’s Health at Albert Einstein College of Medicine, and Dr. Shieva Ghofrany, an OB/GYN with Stamford Hospital, in Conn., to get the lowdown on those garments we wear low down. What are our undies really doing to us down there?

THONGS AREN’T NECESSARILY BAD FOR YOU.

It really depends on your propensity for infections, Dr. Rabin says. “If somebody’s healthy, there aren’t really any dangers,” she tells us. “The issue is if you have a predisposition to getting infections, either urinary or vaginal, it may be harder to get rid of it if you’re wearing a thong.”

BUT THERE ARE SEVERAL FEATURES OF THONGS THAT PUT YOU AT RISK FOR HEALTH ISSUES.

Many thongs, particularly the sexy lacy kinds, are made of non-breathable materials, as opposed to cotton. “We should all always be wearing all cotton underwear,” Dr. Ghofrany advises. This includes the material of the entire panty, not just the fabric at the crotch. “When patients say [to me], ‘But the crotch is cotton,’ my response is that the layer outside the crotch is not, thus making the cotton less breathable and thus allowing more moisture to be trapped and more possible imbalance leading to infections.”

Plus, even if the entire garment is cotton, the skinny shape creates an inherent risk. “The patient’s vulva is much more ‘exposed’ to whatever they’re wearing,” Dr. Ghofrany explains, “and given the increase in leggings and ‘skinny’ jeans, all of which have Lycra, Spandex, etc., there again is trapped moisture.”

Lastly, the thin band of material at the crotch tends to move around, possibly transferring bacteria from one spot to another. As Dr. Rabin tells, us, “If you have a little bacteria — E. coli is the most common bacteria in the colon — in the back part of the fabric and you’re physically active, that material may move. All it has to do is move an inch or two and it’s next to the vagina or urethra. That thong may be depositing colonic bacteria into your vagina or urethra.” Yikes.

THE MAIN HEALTH RISKS WE’RE TAKING WHEN WE WEAR THONGS: INFECTION AND IRRITATION.

Thongs also carry the risk of external irritation. “I see more patients with skin tags on their vulva and near their rectum, in the exact distribution of the thongs,” Dr. Ghofrany tells us. “I sometimes will be mid-pap and ask a patient, ‘So you wear thongs a lot?’ And their response is always ‘Ya! How can you tell?’ And it’s because of the skin tags, small ‘piles’ of soft tissue that occur from the skin being constantly rubbed in the same spot. These happen traditionally at bra lines and neck lines, and now increasingly at thong lines!”

As for more dangerous medical risks, such as hemorrhoids? Dr. Ghofrany assures us that thongs won’t actually cause hemorrhoids, but they can exacerbate them. “If the thong is kind of ‘hiked up’ in there, it can irritate the rectum and further inflame hemorrhoids,” she says. But hemorrhoids can’t actually be blamed on thongs.

WEARING A THONG WHILE YOU’RE ON YOUR PERIOD MAY SLIGHTLY INCREASE THOSE RISKS.

If you’re already prone to infections, Dr. Rabin says, your period is a particularly vulnerable time. “The pH of the vagina is normally acid pH, and blood raises your pH. So when your pH goes up, that’s when bacteria has a better chance of growing,” she tells us. But if you don’t have a history of infection issues, you should be fine to wear thongs during that time of the month, she says: “If you have had no infections and no symptoms of an infection, I don’t see any reason why not.”

BUT WHILE THEY COME WITH RISKS, THONGS ARE GENERALLY SAFE… YOU’VE JUST GOT TO BE VIGILANT.

“If somebody’s healthy, there aren’t really any dangers,” Dr. Rabin says. If you’re prone to infections, thongs certainly heighten the risk. But if you buy cotton thongs, wash them often and maintain your own hygiene down there, you can usually avoid any major issues.