He has described him without any hesitation as a “fool”.

His invectives comes after the Commissioner denied reports in a series of tweets that the Central Regional Chairman of the governing National Democratic Congress (NDC), Allotey Jacobs has been arrested in the UK.

News went viral on social media on Sunday that Allotey Jacobs was busted at the Heathrow Airport by the UK National Crime Agency on suspected money laundering and cocaine trafficking. 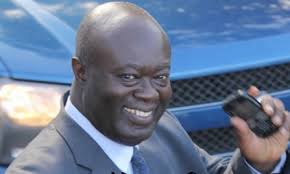 The unconfirmed report also said Ghana’s High Commissioner to the UK, Victor Smith had dispatched officials of the High Commission to rescue the NDC chairman. But Jon Benjamin in responding to the report on Twitter said “the story is not true.”

“I can confirm that the rumor about Mr. Jacobs is definitely not true . . . Mr. Allotey Jacobs transited Heathrow this morning without incident,” he added.

This seems to have provoked the former Asokwa NPP MP and attempts by the host to stop him from further insults again triggered him to hang up in a live radio interview with Kwesi Aboagye.