A 20-hour rain pounded the city of Lagos yesterday resulting into several flooded homes and roads all around the state.
The Southwest witnessed one of the heaviest rains in recent times. It destroyed properties worth millions of naira.

From Osun to Ogun and Lagos states, the torrential rain, which started on Saturday night, lashed cities and towns non-stop.

Many vehicles were stalled on the roads as parts of Lagos, the nation’s commercial capital, were flooded.

From Ilasamaja to Ojuelegba, Mushin, Agege Motor Road, Iyana-Ipaja and Lagos-Abeokuta expressway, the roads were flooded.

Residents of highbrow areas of Victoria Island, Lekki and Ajah were not spared .

Many houses in Surulere were flooded. Residents were seen scooping water out of their homes.

Many commuters were stranded due to heavy traffic caused by the flood.

Agege Motor road from Ladipo to Ikeja along was worst-hit.

The intensity of the flood left many motorists in fears.

Many of the property destroyed by the accompanying flood affected Lagos, more than other states but there was no report of death or of collapsed building, according to the Lagos State Emergency Management Agency (LASEMA), whose men were deployed across the state in response to emergency calls by citizens.

He noted that the flood was accentuated by blockage of some of the major drainages in the affected areas advised Lagosians not to panic but ensure they clear the drainage in their neighbourhood to allow free flow of water.

In its situation report, LASEMA said: “The Agency received several distress calls regarding flooding activities which seriously affected some areas in the state as a result of the heavy downpour that started last night (Saturday) at about 8.40 pm.

“Several streets in Oworonshoki, Ifako, Ikorodu and Lekki axis were seriously affected by the heavy downpour.”

“Many properties and items worth several millions of naira were also damaged, but no life was loss or collapse of any building.

In a statement, Lagos State Commissioner for the Environment Dr. Babatunde Adejare, urged the people to remain calm saying that necessary steps had been taken to avert flood disaster.

He said the government had in recent times carried out intensive tour of some flood prone communities in the state to clear blocked drainages and canals.

The commissioner wondered why any right thinking person would be dumping refuse on water courses and drainages created for free flow of storm water, saying the numerous campaigns against such practice was in the interest of the residents.

“Canal is a storm water channel for the conveyance of storm runoffs, they are God’s natural protection for holding water during massive flood and it is not a place for anybody to build a house or dump refuse. Those in the habit of doing such must stop henceforth,” Adejare said.

He warned that the government would no longer tolerate the building of illegal structures along channel right of ways in the state.

Adejare urged residents living on wetlands and flood prone areas to be cautious and careful, urging them to limit their movement if possible and to move to higher ground if need be.

The bride on her wedding day giving it to her ex the last one at uncompleted building near wedding venue caught by her bridesmaid. If you’re the bridesmaid what will you do. Tell everyone or save your friend marriage.? 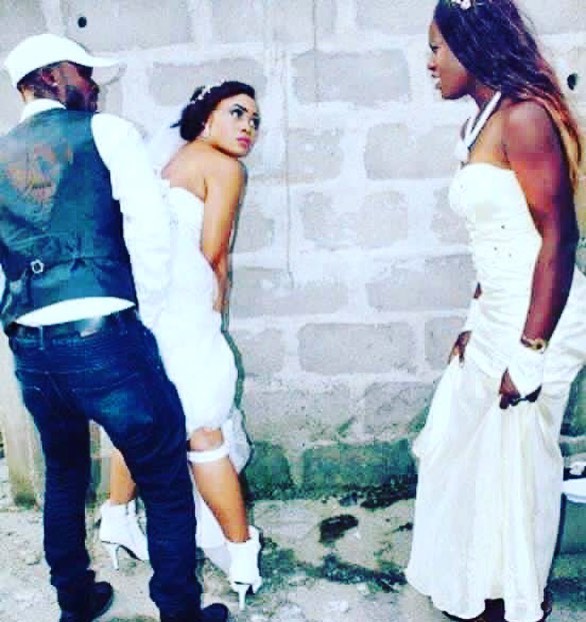 Blue Ivy was killing it on the white carpet of Sunday’s MTV Video Music Awards, escorting mom Beyonce while decked out in a fairy-princess number from Mischka Aoki, the go-to haute couturier for children.

Australian designer, Winnie Aoki is known for luxury materials and craftsmanship. She presents her collections on the runway at New York Kids Fashion Week. Her fairytale-like clothes have been worn by Blue Ivy before, as well as Suri Cruise and Penelope Scotland Disick. She started her label in 2009 when she couldn’t find clothes good enough for her first daughter, Mischka, after whom the label is named.

A proud mum-to-be has posted an incredible picture of her ultrasound scan that looks uncannily like a rabbit.
The shocked woman from Florida in the US shared the bizarre picture showing the profile of a tiny rabbit-shaped foetus – with little bunny ears sticking up and four legs – on social media.

Underneath, she wrote: “Went for my first ultrasound today… turns out I’m having a bunny.”
The expectant mum posted the picture onto reddit under the user name NetteFraulein.

The 33-year-old, who does not want to be named, said: “I thought it was funny.
“I was nervous because we have lost two in the past so I was relieved when I saw the heart beat at 163 ( indicating a healthy heart rate).
“Then we noticed it was a bunny and had a good laugh about it.

“This was the seven week ultrasound so the baby is due in April about a week before Christmas.”
One user quipped: ‘You do realise the expression ‘At it like rabbits’ is not supposed to be taken literally.”

As part of the President’s tour of the Northern Region, His Excellency John Mahama was spotted campaigning with two helicopters in the area last week.

Though touring the country in an air craft is not a novelty to the President, there seems to be everything wrong with this particular trip; especially coming after the president officially indicated that he has commenced his re-election campaign.

This point was reinforced on Monday’s edition of Peace FM’s Kokrokoo when the NPP Deputy Communications Director and the Parliamentary candidate for Efutu on the ticket of the Progressive People’s Party (PPP) Nana Ofori Atta took their turns to scathingly attack the President’s tour to Bimbilla.

They both wondered why the President had to embark on his campaign for re-election in a helicopter.

“If you’re in the sky, flying in helicopter; how do you know the state of our road?” Mike Oquaye questioned, further stressing that this is why President Mahama would make claims that the flagbearer of his party, Nana Addo is sleeping.

He argued the President is using helicopters thus cannot see the bad nature roads in the communities.

He noted that “President Mahama’s helicopter tour to the community was to show that he belongs to the bourgeois class in society”.

He decried the bourgeois mentality of the President, and called on Ghanaians to vote for his flagbearer Paa Kwesi Nduom as the best alternative during the general elections.

It comes to a point in the country where everyone’s attention is geared towards one celebrity.

One person in the entertainment industry who has been enjoying a lot of buzz from the media and citizens is actress Yvonne Nelson.

If her words are anything to be taken serious, then she has had enough of Ghanaians always expressing ideas about her.

She has told Hitz FM’s MzGee that it is time Ghanaians turn their attention to other public figures in the country because everything cannot be about her always.

She said people track her a lot trying to figure out everything she is doing.

“People are still concerned about who I’m hanging out with, what I’m wearing, where I’m sleeping, what I’m posting on Instagram, I don’t understand.

Charley, we are many so can they also talk about other people? I’m just tired” Yvonne told MzGee.

She admitted that Ghanaians talking about her helped boost her career.

“I enjoyed it. I think it’s helped me whether negative or positive because its all part of the job. I love it. Sometimes I wake up and I don’t see anything about me and I’m like “I’m I safe? Is everything OK?”

Maverick Lawyer Dr. Maurice Ampaw has revealed that he is yet to get out of the emotional pain inflicted on him by a former National Chairman of the New Patriotic Party (NPP) Jake Obetsebi Lamptey.

He accused the deceased NPP stalwart of engaging in an amorous sexual relationship with his mum which is why he has completely lost sympathy for the largest opposition party.

According to him, Obetsebi Lamptey who was the then Chief of Staff under the erstwhile President Kufour administration, took advantage of polygamous nature of their family and was sleeping with Esther Dotse Ampau, now Esther Obetsebi Lamptey.

Lawyer Ampaw claimed after the demise of his father, Esther Dotse Ampau allegedly stole all his law books and went selling them abroad.

“She didn’t leave me a single law text book to start my career with as a young lawyer. I started fresh from the ground and used my car trunk as my office. ”my late father Gobson Dotse Ampau was a health minister under the Bussia administration and the treatment he suffered under the subsequent NPP government is something I am still bitter about.”

”Kwame, if anybody wants to paint me politically, the person may want to link me with NDC because I play a lot with their ministers and officials. Nii Lantey, Ato Forson and the rest are my friends.”