Donald Trump’s White House is stocked with 25 staffers who hold the title of “assistant to the president,” according to a disclosure released Friday, which also revealed that nearly two dozen aides all earn an annual salary of roughly $180,000.

The White House posted the salaries of its executive office staff in a 16-page document detailing the earnings of nearly 400 individuals — 18 are “detailees,” a distinction for people who were pulled from other agencies or organizations to temporarily serve in a White House role. The document was also shared with Congress, an annual requirement of administrations since 1995.

The West Wing has always been a competitive place, but Trump’s White House has been especially intense as aides are often forced to respond in real time to the president’s erratic tweets and frequently compete for the president’s ear. Trump’s communications shop has also struggled to contain the sprawling Russia investigations examining possible collusion between Moscow and the Trump campaign.

Cohn told POLITICO his $30,000 salary was to cover the cost of health insurance.

Only three staffers — first daughter and adviser Ivanka Trump, son-in-law and senior adviser Jared Kushner and intergovernmental and technology aide Reed Cordish — take home no pay from taxpayers, according to the disclosure.

Kushner’s personal assistant, Avi Berkowitz, is paid $115,000 — more than any other assistant in the White House. By comparison, Bannon’s assistant’s salary is $40,000.

The Trump White House’s inaugural salary disclosures also show that it has nearly 100 fewer staffers than President Barack Obama had in 2016. Obama’s White House had 473 aides, with 19 assistants to the president.

Here are the salaries of some of the top officials in the current White House:

Hope Hicks, director of strategic communications, assistant to the president — $179,700

Dan Scavino, director of social media, assistant to the president — $179,700

Marc Short, director of the Office of Legislative Affairs, assistant to the president — $179,700

Retired Lt. Gen. Keith Kellogg, executive secretary and chief of staff for the National Security Council, assistant to the president — $179,700

Andrew Bremberg, director of the Domestic Policy Council, assistant to the president — $179,700

Omarosa Manigault, director of communications for the Office of Public Liaison, assistant to the president — $179,700.00

Tom Bossert, assistant to the president for homeland security and counterterrorism — $179,700

Lindsay Reynolds, chief of staff to the first lady, assistant to the president — $179,700

Peter Navarro, director of trade and manufacturing policy, deputy assistant to the president — $165,000

Stephanie Grisham, director of communications for the first lady, special assistant to the president — $115,000.00

Gary Cohn, director of the National Economic Council, assistant to the president — $30,000

Ivanka Trump, adviser to the president — $0

Reed Cordish, assistant to the president for intergovernmental and technology initiatives — $0

Public servants in Uganda are facing a strict dress code after the government issued a circular warning them to “dress decently”. Female staff have been told not to show any cleavage, wear brightly coloured nails, braids or hair extensions, sleeveless or transparent blouses.

Men must wear long-sleeved shirts, jackets and ties, while trousers should not be tight-fitting. Staff failing to comply will be disciplined. The guidelines, issued by the Ministry of Public Service apply to all non-uniformed civil servants. But there is a feeling that female staff are the main focus on the new rules. While women will be allowed to wear pant-suits, they have been warned not to wear any tight-fitting clothing. Dresses and skirts must at least be knee-length. Uganda is a conservative society and women have previously complained of being harassed if they wear mini-skirts in public.

The Ministry of Public Service’s director of Human Resources, Adah Muwanga, said they had to act after receiving complaints: “We were approached with complaints that, specifically lady officers, were dressing in an unacceptable manner, with mini-skirts and showing body parts which otherwise generally should be covered in Ugandan society,” she told the BBC.

She said the ministry has overall responsibility to guide on the administration and management of the public service and “this is how we want the public to view us”. The circular further states that accessories should be modest, while long fingernails of more than 3cms (1.5in) with bright or multi-coloured nail polish are also not permitted.

Flat, open shoes are ruled out, except in cases where one can prove that it is for medical reasons. Men have been told they should keep their hair short and neat, and not wear brightly coloured clothes. The circular is derived from Public Service Standing Orders on dress code, put in place in 2010.

However, the BBC’s Patience Atuhaire in Kampala says the dress code does not seem to have been paid much attention to up to now. Mrs Muwanga said that staff who failed to comply with the new enforcements would be cautioned at first, and repeat offenders would face disciplinary action.

However she added “there is always room for review”.

Brother of the late Kofi Agyiri, an actor in the popular ‘Efiewura’ series which airs on TV 3 has said his brother acted his womanising behaviour in the series that got Ghanaians glued to their TV sets.

According to him, his brother has six children with six different women and for that reason, he could play his role very well because, in real life, he is able to date several women.

He, however, mentioned that although his brother was a womaniser, he was a very responsible gentleman who worked tirelessly to take care of his six children and their mothers.

“Surprisingly, my brother never married! He gave birth to six (6) kids with different women accordingly. More importantly, the late Kofi did his possible best to take good care of the kids as well as his baby mamas. It’ll interest you to know that his ‘womanising’ character as exhibited in Efriewura is a fair representation of his real human behaviour.”

Kennedy Agyapong who appears unstoppable in his recent attacks at some members of his own party, has vowed to bring down the New Patriotic Party (NPP), before he is disgraced.

“If you are not careful with people who helped you or us to come to power and give them this reward…… there is this boy called Siriboe whose father is a council of state member. How much did his father pay? You are there undermining him….NPP boy. I mean those NPP people who have vowed to collapse my business saying they will bring me down…If they joke the things I will say In Ghana……the way we won the elections. We did not win the elections on fair grounds. I am warning them for the last time. If they say they will bring me down, I will be the first to bring the NPP down before I am disgraced”, he revealed on Oman Fm, his own radio station.

According to him, he is among those who want the betterment of the party for fear that when the NDC returns to power it will spell his doom.

“Those of us who have shown our faces and ready to die for the party, if care is not taken and the NDC returns to power we are finished”, he disclosed.

This is not the first time Mr Kennedy Agyapong is raising concerns about what the NDC might subject him to should luck smile on the party in 2020.

Last month, he revealed that jailing him is among three options the opposition National Democratic Congress (NDC) is weighing in the event it wins back power 2020.

“My life is on the line. Why is that when Ibrahim Mahama commits a crime I should speak about it but when my own party member commits same I should be quiet”, he asked.

Commenting on recent developments in the NPP with some bigwigs scheming to bring him down with planned meetings at Alisa Hotel in Accra, he said he will not sit down while persons who did little to improve the fortunes of the party bring the current administration under Nana Addo Dankwa Akufo-Addo down.

“God has blessed me and they will all be disgraced. Whatever they are doing will fall flat because I am fighting a just course. Na true I go talk”, he explained.

“I will correct all wrongs in NPP because should NDC come into power now, they will either kill me, collapse my business or find a flimsy charge against me to be jailed”, he alleged. 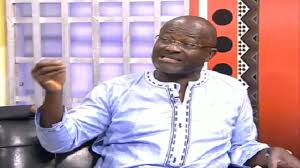 CHECK OUT THE COMMENTS::